Cover Story: This project started as a speculative essay and sort of picked up some music and video collaborative energies as it rolled along. At times, some tongue is mastered into the final cheek. Kurt Cobain hovers about in ways that will become oddly apparent. This will not be everyone’s cuppa tea. What’s unanimity of opinion but the dull prize of political hacks and Nickelback fans?

We’ve also replicated the entire The Man Who Sold the World album. All nine tracks are interspersed hereabouts. Attempting cover songs, especially those of a musical icon of David Bowie’s stature, is about as welcome to some as doodling in the margins of the family Bible. Some covers are a shameless trespass. So I can relate to a sense of affront. Those folks most revering of the original artist are often the harshest critics. Take away that core, rabid Bowie fan-base and it can be you, your house cat (nurturing sudden dreams of ferality) and the occasional befuddled cyber-trekker.

Given Bowie’s songwriting prowess especially, it would be very interesting to hear his rationale for undertaking so many covers of his own. Music reveals itself  asynchronously. Different things are learned about a song moving through it, inside-out, as opposed to always greeting it at the cochlea in duteous listening mode. We can also enjoy performing a song that does not offer a compelling listening experience and vice-versa. In the end, the spiritual implications of music are unavoidable. Music is a consciousness-raising experience or conveyance with gnosis imparted from one secret listener to the next. Appreciation is directional. Soundwaves are contextual.

Often the most approving cover-listeners are those encountering the music without preconception, perhaps for the first time, and thus unencumbered by angst over defiled sacred texts. May these new ears accrue to the greater power of Bowie. If our two cents help enlarge the market for the original works, that’d be a great outcome. In the end, this is a Jungian excursion with a garage band addendum. The disclaimer portion of our program is hereby concluded. Further defensiveness will be resisted for the remainder of the show.

Earnest and raw, The Man Who Sold the World (1970) routinely misses Bowie listeners’ Top Ten albums (Though it’s allegedly Morrisey’s favorite, if that matters to anyone.) How curiouser and curiouser. Bowie is mired in spiritual arm-wrestling here. While image-shifting has been toyed with, psychic swap-outs still lie somewhere off in the distance. Fear and expectancy are palpable. Madness is a looming threat. The outcome is unknown. On TMWSTW, honesty outstrips artifice by a mile. We hear Bowie as we will never hear him again. We hear Bowie at the onset of his perpetual arrival.

Yes, he walked, he talked. He wore spandex. There was a Berlin period. One might say the endless and continued fascination with Bowie biographical detail masks a palpable anxiety. As so many fashioned their own belief systems from the interiority implied by Bowie’s emanations, it seems reasonable now to ask, was a gnostic bequest imparted in the soundbeam? Perhaps we were, in adolescent haste, unduly swayed by Bowie’s immense, media-magnified shadow. Never to grow old like proper citizens of Hamlin I wonder, did Hunger City starve us of some birthright, maybe the Good Mens’ city keys?

I cannot bring myself to believe in mere entertainment and mere art. Spiritual lassitude is the devil’s plaything. Repetition, even of the mundane, leaves trace-marks on the soul. So when I am informed by the moneychangers we treated you to endless repetition for wealth alone—my poet-heart insists that can only be a partial answer. Icons are always telling us something about ourselves, if only our bad taste in iconography. Sure, promotion can push. But as Jung might say, there are no accidental icons. One day, some archetype elected to manifest in a tacky dress or as John Lennon famously said of Glam, “rock ‘n roll with lipstick on.” The surface always has ulterior motives. If you believe in the synchronistic timing of archetypal manifestation and those standing by with the ears to hear, we were ready for the message.

I thus call upon all indolent parties to stir from their pop slumber. For many, Bowie’s effect was consequential and begs the deepest questions. Art is after all a question to which all parties must fashion their own answers. Fans are notorous for hammering their rock gods to bedroom walls until the latters’ bleeding palms cry uncle. However no human is mandated to serve as another’s static poster-jockey. Much to the dismay of the indolent, everyone must jump.

Part of a rock star’s job is to chuckle through his sleeve at spectation. Biographica loses instructive value quickly and lapses into a dispirited cult of personality or a boarded-up Church of Man, love. The subject escapes the edifice. Leave my shoes and door unlocked. I might just slip away. And he will. And we do. But before you slip away, ask yourself, were you a carpet rider or an epic storm on the horizon? There’ll be no leaning on others at the next bardo.

Searching for cultural antecedents, I find Bowie wed inextricably to Carl Jung. This marriage seems beyond reproach. We trivialize Jung and his adept foremen at great peril. But enough celebrity-baiting. What does this Bowie-Jung alliance mean for you and me? With Jung, we reach an unavoidable forked path. Either the devil is an inward shadow to be collapsed and integrated within the psyche or he is a pernicious external entity against which barricades must be erected. Given Lucifer’s reputation as the Great Deceiver (he is endowed with a brilliance well beyond the keenest human mind), one could argue the best way to infiltrate a human soul is to approach it as a twin separated at birth. (Whether a Jungian exhortation or more biologically derived, Scott Walker’s singular torment is tied up in lost twin dynamics. Walker has his own resplendent demons. Beckett proves helpful.)

So go ahead, give that big lug, your recalcitrant shadow, a hug! Jung is seductive alright. If only feeling good was a litmus for truth. Because pleasure heightens the senses it should heighten our suspicions too. Jung domesticates the boogie man and repairs the universe within little ole us. I dunno, but for me at 3 am, this all sounds mighty too helpful. I’m more receptive at high noon when the sun blasts all shadows into patent leather uprights. Is Jung a purveyor of genius, hubris or deception? Bowie is a Jungian proselytizer, a foreman par excellence, consciously or not. As to whether the monster is me, you or some hoofed gate-crasher, well, that’s an age-old spiritual question each soul must resolve to its own satisfaction. (Here, we do not preach. We do not prescribe. We simply ask out loud so that all might fashion better questions.)

Bowie charged into all things with Jungian gusto. Jung was an occultist. No wait, he was a scientist. Once upon a time, and not so long ago, esotericism and science got along famously. (I once met a Geiger counter at a seance and it seemed happy enough.) Sir Isaac Newton was a hermeticist who birthed an entire epoch of physics. We mustn’t let demarcations become ravines. Bowie was ravenous for himself. He loathed himself. The hunger and the famine were cont

agious. But we regular folks must push away even from the most sumptuous banquets set by our exemplary fellow travelers for fear of becoming pedestrians at our own repasts. Fandom promotes deformation of character, both for the fanee and the fanner. For what is a fan but a futile device aimed at ameliorating the atmosphere of Her Majesty, some queen bitch who suddenly finds the banquet hall oppressively stuffy? No soul is mere appendage. It offends all deathbeds to confess myriad hours spent absorbed in some ephemerality, say pop music, while pretending no great effect. We all must jump. Don’t kid yourself. We all do jump. A rock god deification project is the recycled search for an external messiah. How odd that non-Jungians should call upon a strident Jungian to save them –talk about two farflung trains.

So where did you land Righteous Brother and do you feel comfortable within your skin in your own collapsed locale? Hopefully it was not a destination chosen for you. This is no gushingly sentimental Bowie scrapbook. The Internet is polluted with glittery shrines and tin-foil altars. The chameleon has been sorely skinned to death. No more titillating factoids please from ever-more authoritative dumpter-divers. This is a grown-up inquiry steeped in interiority. Life is no game. Tell us what you think. Or don’t tell us. Just think.

* I should add that the writing in this blog was completed almost three years in late 2009. Thus the focus on the album The Man Who Sold the World is entirely coincidental with the 2011 Peter Doggett book of the same name, though we have briefly corresponded.

Norman Ball is a poet, playwright, essayist and musician residing in Virginia. A featured poet on Prairie Home Companion, his poems and essays have appeared in Light Quarterly, The Raintown Review, The Berkeley Poetry Review, Epicenter, Oxford Magazine, The Cumberland Poetry Review, 14 by 14, Rattle, Liberty, The Hypertexts, Main Street Rag, The New Renaissance, The Scotsman, The London Times among dozens of others. His essay collections, How Can We Make Your Power More Comfortable? (2010) and The Frantic Force (2011), both widely available on the web, are published by Del Sol Press and Petroglyph Books, respectively. His recent play SIDES: A Civil War Musical (Inspired by The Red Badge of Courage) is currently being produced for TV by Last Tango Productions, LLC. A musician, song writer, vocalist and videographer, a couple of Norm’s Bowie ‘live cover-covers’ can be seen here: 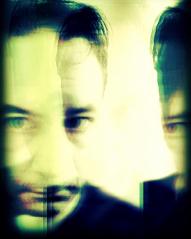 Wayne Corbett is a multi-instrumentalist from the north of England.